Since the pandemic took us all by surprise, life has changed for everyone. And we've had to find new ways of doing things.

Overseas tourists, for the moment, are staying home. The big sites, like the Tower of London, have temporarly closed their doors and lockdown has meant that we've been limited in what we can offer.

With lockdown easing however, Mr Londoner has teamed up with John and Liam from new start-up Virtual Trips to offer virtual journeys in real-time. We tour local neighbourhoods - with our guests enjoying the journey from the comfort of living rooms in all four corners of the globe.

Our virtual tours include...

The Westminster Village. See the birthplace of European democracy from the comfort of home. This tour takes in some of London's most famous landmarks, including Big Ben and the Houses of Parliament Westminster; Westminster Abbey, where our kings and queens have been married, crowned and buried for 1,000 years and No 10 Downing Street, currently home to our at times chaotic Prime Minister, Boris Johnson.

On the waterfront. This tour takes in the River Thames with views of Big Ben and the London Eye. The journey also takes us to the very front door of New Scotland Yard. The Ministry of Defence is right next door. This rather anonymous inter-war edifice in white stone contains a hidden secret. Below ground is home to the ancient wine cellar of the former Whitehall Palace. And talking of secrets, the CIA is rumoured to have an office on the upper floors.

Blitz City. Discover the hidden histories of WW2. Post-war re-building and gentification has all but removed the evidence of the 1940 bombing of the capital, which claimed 20,000 lives. This tour around the St Paul's area. This famous part of town is home to London's famous cathedral and tells the dramatic story of the Blitz and contains some of the lasting reminders of those darkest of days.

Garden City. Lockdown has given us all, country dwellers and city slickers alike, the chance to celebrate the natural world. London is officially an urban forest and a place famous for its green spaces - from large parks, formal gardens, private squares and spaces in between. These include river banks and canal sides, beloved of dog walkers, runners and cyclists. Join me in St James' Park to explore London's prettiest green space, see the famous Horse Guards Parade and enjoy unusual waterside views of Buckingham Palace.

A walk on the wild side. Head south of the river to discover Bankside. This once chaotic working-vlass neighbourhood is today home to the Tate Modern, Shakespeare's Globe and the 'Wobbly' Bridge.

Sex, Death and Shopping. Soho's is London's dark underbelly. At least it was. It's rather more civilised today. So, does the Soho of decades past - fiercely independent, occasionally seedy, always flamboyant - still exist? Well, it does ... if you know where to look. Our virtual tour of Soho delves deep into the area's dark past and its exciting present. 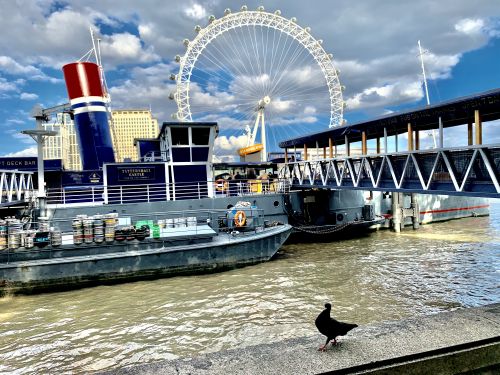