Join me in my own manor, Highbury, in London's Islington.the home of Arsenal Football Club

My tour centres on Highbury Fields, the largest green space in the Borough of Islington. This is where Hugh Grant lived in the film Four Weddings and Funeral. It's a lovely corner of secret London and we made a little film about it. Click here to see it.

Islington is just north of the City of London. It’s been home to high-profile figures including fashion designer Alexander McQueen, singer Sade and author Angela Levy. Politicians of all persuasions seem to love the neighbourhood too. Boris Johnson, Tony Blair and Jeremy Corbyn have all at some point called the place home.

At the heart of the borough are Canonbury, Barnsbury and Highbury. Highbury once comprised monastic lands belonging to the Priory of St John of Jerusalem. Henry VIII broke with Rome in 1534, dissolving England’s monasteries and giving this patch of land to his right-hand man Thomas Cromwell - he of Wolf Hall fame. The unfortunate Cromwell had little time to enjoy his new acquisition: Henry had him beheaded in 1540.

In these more peaceful times, Highbury is the home of football. Arsenal FC has played here since 1913, moving into the 60,000-capacity Emirates Stadium in 2006. Highbury is also home to the borough’s greenest spaces, from nature reserves reclaimed from railway yards, to the elegant Highbury Fields. This is a green oasis fringed with fine Victorian and Georgian properties. It’s the largest open space in the borough at 11 hectares, and was purchased for public use in 1885.

Here are five things you probably didn't know about this picturesque corner of north London.

1. Highbury Fields was not the home of Jack the Ripper, probably

Turn of the century ‘Camden Town Group’ artist Walter Sickert lived in Highbury Place. He was a pupil of Whistler and his work is certainly dark and broody. Author Patricia Cornwell was so convinced Sickert was Jack the Ripper that she penned two controversial tomes on the topic. She maintains readers would rather enjoyyou  the mystery than have a solution. The debate continues.

2. Highbury is home to one of the corniest lines in cinema history

“Is it raining? … I hadn’t noticed,” a love-struck Andie MacDowell says to a bumbling Hugh Grant, outside 22 Highbury Terrace in Four Weddings and a Funeral. Grant’s expletive-laden rant at the start of the movie took place at nearby Highbury Corner.

3. Britain’s first gay rights demo was held here. The Gay Liberation Front led a candelit procession on 27 November 1970 in protest at the recent Highbury Fields arrest of Louis Eakes, a young gay man. This was a watershed moment for British society. Homosexuality had only been legalised in 1967 but many aspects of life for gay men still remained criminalised into the 1970s.

4. They dug for victory. Highbury suffered during wartime. The Fields themselves were given over to growing fruit and veg for the neighbourhood. Two rocket bombs fell nearby in 1944. One of them scored a direct hit on Highbury Corner, destroying the station, claiming 28 lives and hurting 150 others.

5. The Anne Frank tree lives on. In 2010, a storm destroyed the beautiful Horse Chestnut tree outside Anne Frank’s former home in Amsterdam. Fortunately cuttings were taken before it fell. One was transplanted in Highbury Fields at a special event in 2018. Guest of honour was Dr Eva Schloss, an 87-year old Auschwitz survivor, who described the young sapling as “A symbol of hope”.

Join me on a walking or bike tour of Highbury and I'll tell you the story of the area, incorporating these five things and much more besides. Here's my film about Highbury. 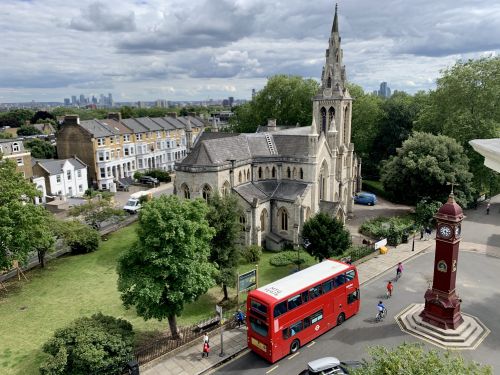